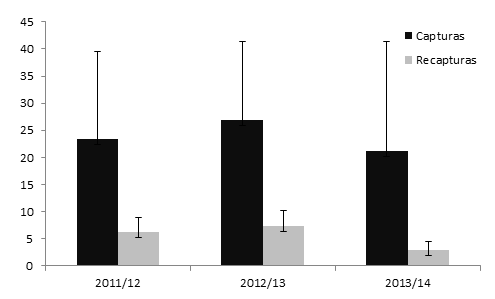 Since the winter of 2011/12 the Experimental Farm of Mitra (EFM) is integrated in the monitoring wintering bird’s project led by the Portuguese Association of Bird Ringers (www.apaa.pt/mai01.html).

The goals are to implement constant effort ringing stations, performing standardized ringing sessions in order to monitor the changes in passerine communities. Thus, between November 15 and 15 February 6 ringing sessions are held, i.e. a session every 15 days, maintaining exactly the same number of mist nets in the same locations. The EFM station is located in the olive groves and gardens area, near the Páteo Matos Rosa and we used about 130 m of vertical networks.

– Thirteen species have been caught repeatedly in all years